Fresh off its Tony Award winning, 25th Anniversary revival on Broadway, The Park Players is thrilled to have been granted performance rights for Angels In America, Part One: Millennium Approaches for November 2018. Helping us to bring this truly groundbreaking work of American theatre to our stage as director will be Joe Bailey, Artistic Director of The Ringwald Theatre.

The production team has already been meeting to plan Joe’s vision for the show and now it’s time for everyone else to join in.

We will have our traditional Meet The Director gathering during our summer picnic (August 5th, 1pm). We would like to start this discussion around 1:30, giving everyone a little time to arrive and get settled. Joe is anxious to speak with auditioners and describe his vision for the show. I can say this, Joe wants the audience to be drawn in the old fashioned way, by the acting!

Here are the script cuts that will be use for auditions.

Also looking over the list of characters on Wikipedia is a good place to start.

Please be aware many characters in this show are considered gender and/or racially specific. 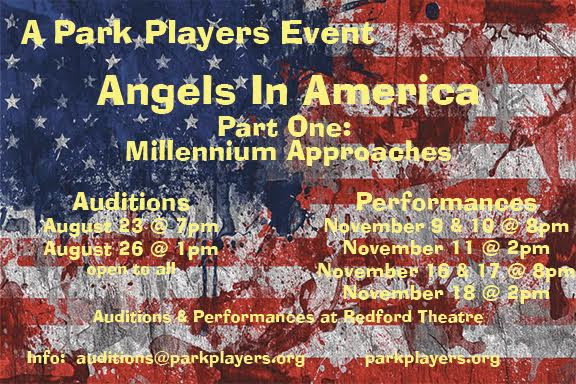 Then there will be the auditions. They will be held on Thursday, August 23rd @ 7pm and Sunday, August 26th @ 1pm, at the Redford Theatre ( 17360 Lahser Rd, Detroit 48219) Attendance at both audition sessions is not required. We will take an audition photo so you really don’t need to bring anything with you.